I made some absolutely delicious truffles today, and I was all set to write a post about it. Then I looked at my blog home page and realized that my last post was also about truffles. (In fact, a LOT of my posts are about truffles.) Also, Easter was just the other day, so it occurred to me that some of you are probably feeling a little stuffed, maybe even a little ill from all the chocolate eating. In thinking about how guilty and sick you might be feeling, I began to feel somewhat stuffed myself. I’ve been eating loads of homemade, delicious but cheese covered pizza and of course, tonnes of chocolate. It was time, I decided, to eat something yummy but healthy. And so, I made myself the healthiest dinner that I am capable of eating. I have difficulty eating leafy vegetables you see, they literally make me feel unhappy and hopeless. But this particular magical recipe for spinach lentils that I am about to share with you is as spicy and flavourful, as it is good for you. I am no doctor or nutritionist, but I think you’ll all agree with me when you see the ingredient list.

Oh and as you can see from the title, this is a Hyderabadi recipe. Hyderabad is the capital of a southern State in India: Andhra Pradesh. It was the seat of the Nizams, who ruled Hyderabad for about 2 centuries. The word Nizam or Nizam-ul-mulk means ‘administrator of the realm’ or ‘governor of the nation’ in Urdu. This is because the first Nizam was originally appointed by the Mughal emperor to oversee and govern Southern India on his behalf. As the Mughal empire began to crumble (for a brief overview of Mughal history go here), Asaf Jha who was a Mughal noble and a Nizam, declared independence from the Mughals and founded his own dynasty, the Asaf Jha dynasty, also known as the Nizams.

The history of the Nizams is of course more complex than this little paragraph intimates. It is full of battles, intrigue and all the other stuff that good history is made of. But this post is about food, also I am not a historian. I just wanted to give you this brief little background so you can understand Hyderabadi cuisine better. I would recommend reading more about the Nizams though, about their food, jewellery and architecture in particular.

Because the Nizams were essentially nobles from the Mughal court, their food was strongly influenced by Mughlai cuisine. But South Indian food, more precisely Andhra food, i.e. the food the locals ate (and continue to eat today) before the Nizams came to Hyderabad, is also delicious and distinctive. Typical Andhra foods include: spicy peppery Rasam; Chappala Pulusu (fish curry); and Erra Avakaya. So it isn’t surprising that Hyderabadi food blends Andhra and Mughlai styles. Andhra food itself can be broken down into several different types based on different regions of the State. There are also hints of Arab, Turkish, Parsi and other influences in Hyderabadi food. So you see, it is bastardized, pluralistic, and historically rich.

It is also amongst the most delicious cuisines on earth. I kid you not. It’s as spicy as South Indian Andhra food, its magnificence equals Mughlai food (like dal Makhani), and it’s as rich and flavourful as Italian food can be.

Anyway, now that you’re sold on its deliciousness, here it is, a spicy palak dal- Hyderabadi style:

1 cup of moong dal (a type of lentil, native to India)

About a medium sized bunch of spinach

5-6 green chilies cut in half lengthwise

(The following are the ingredients for the tadka baghar or popu)

5-6 fresh curry leaves or about 10 dried ones

2-3 tablespoons of ghee (you can get ghee at an Indian store; if you want to make south Indian ghee, you can read my recipe here)

The first thing to do is to prepare the dal (lentils). I use moong dal for this recipe. You should be able to get these lentils at an Indian store, if you don’t live in India. I normally soak lentils for about 20 minutes before I cook them. If you don’t have the time to do this, you can skip this step. This is how the lentils look soaked:

The easiest way to cook dal is to cook it in a pressure cooker. If you don’t have one, just boil the dal in water until its cooked. Add half a teaspoon of turmeric and some salt to the dal before you cook it. Once it’s cooked it should look like this: 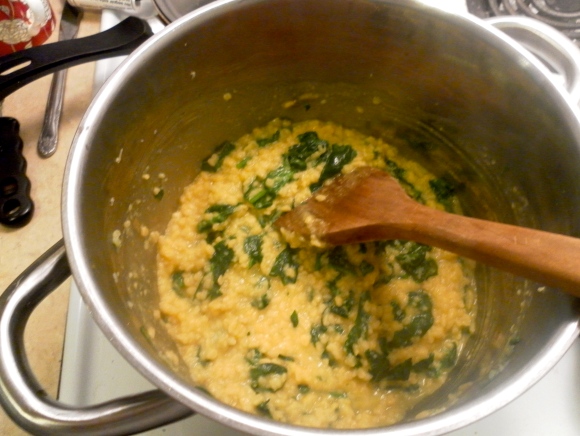 Let this cook for about 10 minutes. Then add half a tablespoon of dried Mango powder (Amchur), the green chillies and the coriander sprigs to the pot and again, let the dal cook. After about 5 minutes we’re ready to add the tadka or baghar (tempering of spices in oil).

Heat a tablespoon or two of ghee in a little saucepan like this:

Let the ghee get hot. To test if it’s hot enough, throw a single cumin seed into the pan. If it begins to sizzle, add the rest of the cumin along with the mustard seeds and stir them about until they start to pop. When they start to pop, add the curry leaves, garlic cloves and red chilies. 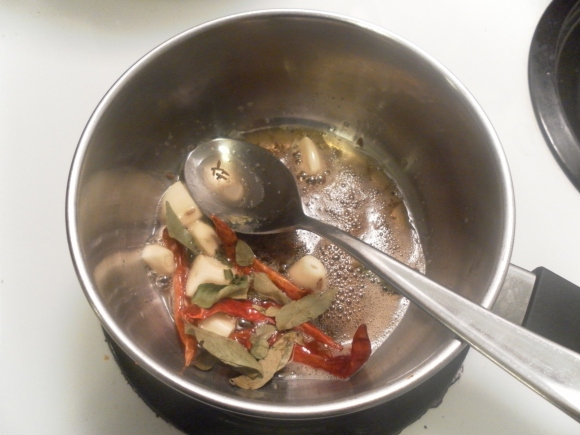 Add the baghar to the lentils.

and immediately cover the pot.

The dal is now ready! Serve it with some hot rice, yoghurt and a papad.

Wow. That looks delightful. If only I had the ingredients to make it for dinner tonight!

Its Awesome dish….this dish more oftenly i seen in Restaurants in Hyderabad…Its Yummy too..!!!

Your posts offer so much learning and lovely photos. I am glad you sought out my blog. Your work is a feast for the eyes, stomach and soul!

Thank you for your compliments 🙂 Yeah, I visited your blog after seeing that you ‘liked’ mine and I enjoyed your posts too. I visited that gelateria in Casco Viejo by the way, it was pretty darned good!

glad you made mention of granclement in casco viejo…. That’s my gift-from-the-universe for tonight! Your blog is truly awesome!

[…] missing, I wanted to make something with a Hyderabadi base (for more on Hyderabadi food, read this post). So I did some reading and thinking, and revisited memories of some of the more delicious kababs […]

[…] origins of Hyderabadi food and its evolution (involving the Mughals and the Nizams) in a previous post.) On top of all this, several Hyderabadi dishes play an important role in my own personal history. […]