This is by far the most delicious banana bread that I’ve ever had. It’s a miss-mash of a few recipes I’ve tried out before, but it’s predominantly based off of Jamie Oliver’s banana bread recipe, which can be found here. Overall, while I liked his recipe the best of all the ones that I’ve tried, it wasn’t boozy 😉 and his chocolate butter, while delicious, was a bit too sweet. So, I played around with the recipes for both the bread and the butter a bit and came up with this one.

Also, just a clarification, the bread doesn’t actually have a strong taste of alcohol; I was just being flip and I liked the alliteration in the title.

This bread is a great addition to a tea party!

Or, you could just make up a loaf, and eat a slice or two every day as an afternoon snack, with tea 🙂 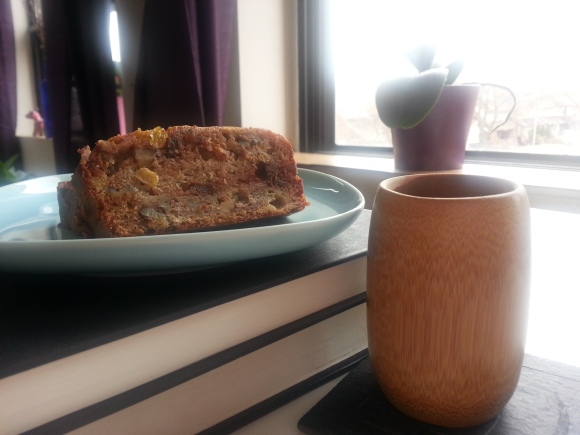 For the Banana Bread:

Enough rum to submerge the raisins completely (about 100 ml)

500 g frozen, very ripe bananas, (measure the weight once you have peeled the bananas)

A couple of pinches of salt

A couple of pinches of salt

For the Chocolate Butter:

The zest of an orange

50 g icing sugar (you might want to play around with the amount of sugar you use based on the bitterness of the chocolate you are using and of course, on your taste)

General notes about ingredients: Leave the eggs and butter out on the kitchen counter for a few hours before you begin making the bread so that they are at room temperature. Also, unless otherwise specified, when I list the amounts of dry ingredients you should use in a recipe, I mean levelled tea spoons, table spoons, and cups.

Place the raisins and rum in a little pot or saucepan and place the pot/pan on medium to high heat on the stove. Once the rum is boiling, take the pot/pan off the heat, cover it, and set aside for at least an hour, until the raisins have soaked up all the rum 🙂

Pre-heat the oven to 170 degrees celsius (325 degrees fahrenheit). Sift together all the dry ingredients into a medium bowl. Take two half litre loaf tins (or a single one litre tin) and line them with parchment paper that has been buttered on both sides. Once the oven has pre-heated, place the walnuts on a baking tray and toast them in the oven for 4-5 minutes, until they are slightly darker in colour and you can smell an aroma coming off them. Be careful not to over-toast them. While the nuts are being toasted, mash-up the bananas in a bowl. You don’t have to make a smooth paste of them, it’s ok if there are a few chunky bits in the banana paste.

Next, beat the butter and sugar together using a stand mixer or hand-held mixer (egg beater) until the butter and sugar form a smooth, creamy mixture (say for about 5 minutes at medium to high-speed). Now, beat in the eggs, one at a time. Once you have an even/smooth mixture, mix in the bananas, walnuts, and rum-soaked raisins with a spatula or spoon, followed by the dry, sieved ingredients. The batter is pretty thick; as you can see, my wooden spatula was standing up in the batter without any support: 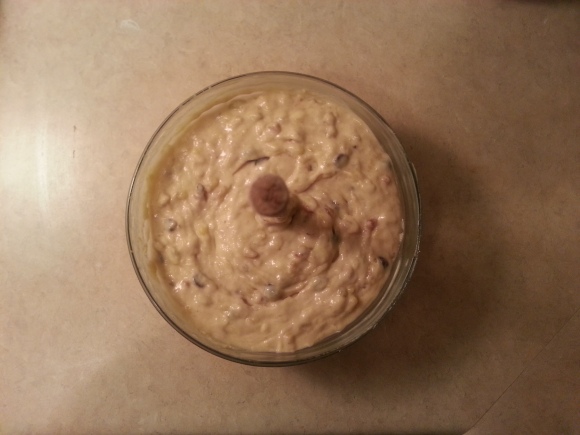 Pour the batter into the prepared tins and bake in the middle shelf of your oven. You will know the bread is done when you poke it with a tooth pick or skewer and it comes out clean. This should take about an hour, depending on your oven.

While the bread is baking, you can get the chocolate orange butter ready.

Melt the chocolate in a double boiler (you can also do this in a microwave, in which case, make sure to use a low heat setting and monitor the chocolate, so as not to burn it). Once the chocolate has melted, take it off the heat and stir in the orange zest. Set the chocolate aside. In another bowl mix the butter and sugar with a hand-held mixer until smooth and creamy. Finally, stir the orange-infused chocolate into the sugar-butter mixture.

It’s ready! You can serve and/or store the butter in a bowl, on a little plate, or even in a butter dish. Whichever way you choose to serve/store it, sprinkle some coarsely ground salt on top of the butter; it’ll look nice and taste even better 🙂 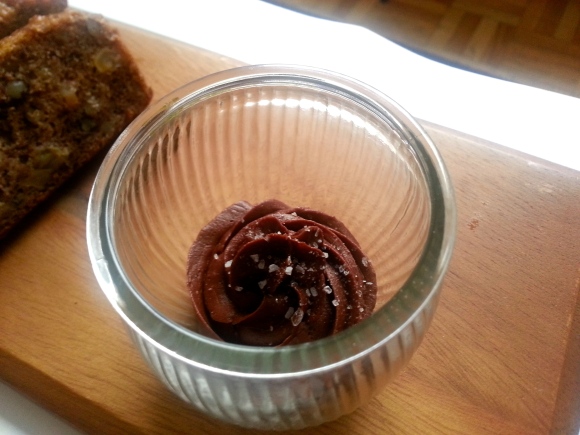 One thing to note, the butter is best served/eaten at room temperature when accompanying the bread. Of course, it tastes great cold if you’re just eating spoonfuls of it by itself. Fair warning though, it’s pretty unhealthy and you might feel quite ill if you eat too much, so moderation is advised!

This is the bread, once it was baked and sliced up: 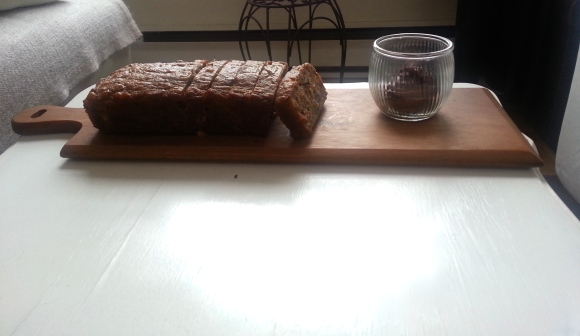