In a previous post about Panama I wrote about Isla Grande- this beautiful island in the Caribbean. When it was time to leave Isla Grande, we took a boat to the coast (to La Guaira) and then got on an another quintessentially Panamanian bus to Portobelo. Portobelo is a picturesque, sleepy, colourful (literally) town in Colon Province. See how brightly coloured the houses are: 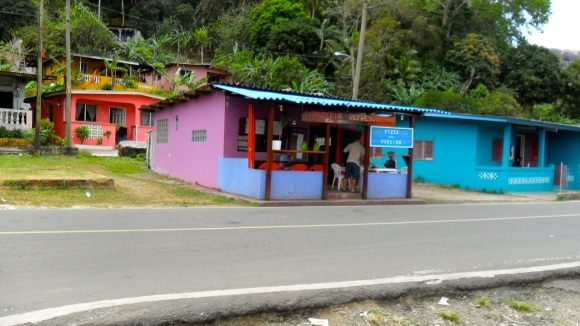 But what it’s really famous for are the following:

A famous statue of the black christ or El Cristo Negro is housed in a church called Iglesia de San Felipe in Portobelo.

Legend has it that the statue of the black christ was carved in Spain and was being taken to Colombia, but the crew decided to leave it behind in Portobelo because it was bringing them bad luck. Portobelo is now the site of an annual festival called the Black Christ Festival.

Apparently, one third of all the gold in the world passed through Portobelo. All this gold was processed in this spanish customs house built in 1630:

Because there was gold, obviously there were pirates! Apparently, Portobelo was attacked repeatedly by pirates. The most famous one to attack and sack the town was Captain Morgan! As a result, the Spanish fortified the port. The beautiful forts are now in ruins.

Now, I’ve seen plenty of forts in India and Europe, but I found two things to be particularly striking about these forts. First, dead coral was used in the walls!

The other thing that was absolutely magical about these forts was the unparalleled beauty of the Caribbean; I’ve never seen a more gorgeous backdrop to a fort in my life! Here are some of the vistas I am talking about:

What made the forts absolutely gorgeous in my eyes was the contrast between the coral and the Caribbean blue-green; the ocean was such a striking and wonderful backdrop to the textured off-white of the coral walls of the forts.

I can honestly say that Portobelo is one of the cutest, prettiest, sleepiest little towns that I have ever been to. As I said, it was indeed full of beautiful colours.

The corals in the walls are really quite fascinating! Love your post!

You know, I didn’t notice them immediately, but once I did, they were the most memorable aspect of the fort.

Really enjoying the snapshots and the photos. You have the makings of a travel writer. More and more options opening up Megha.
Love
mom