I’ve been baking a lot this week for some reason. I think the return of cold weather has put me in the mood for it: a warm oven giving off the aroma of vanilla, cinnamon, and nutmeg can go a long way in consoling me on these dreary grey afternoons.

My latest and most exciting baking experiment was this spiced banana rum cake.

This is a delicious and simple cake to bake; in my view, even someone new to baking will find the recipe for this cake a tough one to mess up 🙂 Also, most kitchens are likely to have these ingredients lying about in them. It’s based on one of Dorie Greenspan’s recipes, taken from her iconic book “Baking: From my home to yours”.

The cake is also versatile: it can be served at different times of day in varied contexts, such as for tea, as dessert, or even as a mid-morning study-break snack. I decided to bake it on a whim this Saturday and brought it over to a friend’s for dessert. As it turns out, it’s actually an ideal dessert to take with you to other people’s homes because it is relatively easy to transport.

If you’d like to spice up your fall afternoons or a friend’s dinner party with this cake, here is a 13 step guide to making it!

Note 1: I’ve provided the quantities for ingredients in grams (except for a few dry ingredients that have been measured in teaspoons and all liquids which have been measured by volume) because I find measurements by weight to be far more precise in the home-cooking context. I have also provided an approximate measurement in cups for those of you who don’t have digital weighing scales at home.

Note 2: All ingredients should be at room temperature, so set them out a few hours before you plan on starting on this cake.

For the Rum Syrup:

For the Cinnamon Sugar:

Measuring cups and, if available, a weighing scale

2. Whisk all the dry ingredients listed in Group A together in a medium size bowl until evenly mixed.

3. In a second medium-sized bowl or a stand mixer, beat the butter at a high speed until creamy. Next, add both the sugars and beat again until creamy (about 3-4 minutes).

4. Add the egg and vanilla to the butter-sugar mixture and beat until smooth.

5. Lower the speed of the mixer and add the mashed bananas. The mixture will look fairly unattractive at this point. Dorie Greenspan describes it as “curdled” which is pretty accurate 🙂 Don’t worry about this.

7. By now, you should have a fairly smooth and delicious smelling batter. Pour this into the prepared cake tin and place in the oven to bake for 40 minutes or so, until browned on top. The cake should come away from the edges as shown below. Check if its done by inserting a toothpick. If it comes out clean, the cake is done.

8. While the cake is baking, prepare the rum syrup and cinnamon sugar. For the syrup, place the sugar and water in a small bowl on the stove on medium heat, stirring until the sugar is dissolved. Once the sugar is dissolved completely bring the syrup to boil and then transfer it to a heat proof bowl. Mix in the rum, cover and let cool. In the meantime, mix the cinnamon and sugar in a small bowl using a fork until evenly mixed.

9. When the cake is done (as shown above), take it out of the oven and carefully remove the cake from the cake tin after letting it cool for about 10 minutes. Make sure you keep the cake intact and place it right side up, with the beautifully browned dome on top.

10. Using a narrow knife or a skewer, poke holes all over the cake. Now, with a basting brush, carefully brush the rum syrup all over the cake, working slowly so that the cake soaks up the syrup evenly. How much syrup you want to use is up to you; it’s not a very sweet syrup, so the cake won’t become overly sweet should you decide to be generous with the booze.

11. Once the cake has cooled and the syrup has soaked in, lightly dust the top of the cake with cinnamon sugar.

12. Serve as is, or with whipped cream and/or strawberries. 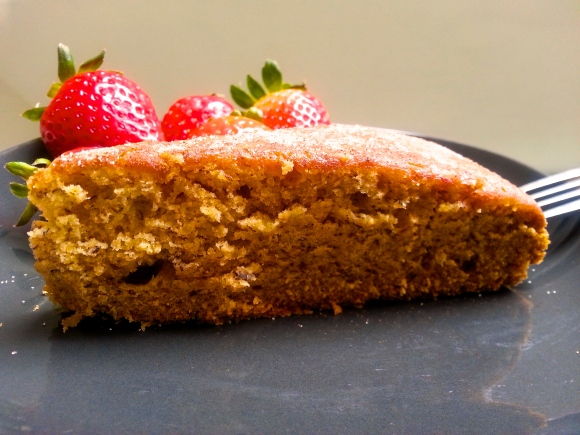