I had a lot of crostini left over from a big party I threw, as well as plenty of olives. So here’s a little snack I came up with using these left-overs.

This tuna and olive crostini makes for a delicious snack or even a light dinner; and it’s pretty easy to make. What’s more, the recipe doesn’t involve too many ingredients and it isn’t labour intensive at all.

Here’s what you will need:

A teaspoon of olive oil

A can of tuna or half a cup of fresh tuna

A handful of good quality pitted olives, ideally, use a combination of green and black olives.

A wedge of lime

To begin with, cut two slender slices off a baguette. Brush both sides of the baguette with some olive oil and grill the slices in a panini-maker or the oven. If you’re using an oven, pre-heat it to 350 degree Fahrenheit and then bake the slices for about 15 minutes, until golden brown. Next, top off the bread with some tuna, squeeze some lime juice on top. Slice the olives in half and then arrange them on top of the tuna, as shown in the photograph below. Place the slices in the oven and let them bake for 5 minutes.

In the meantime, cut 3-4 slices of cheddar. Once the slices have baked for 5 minutes, place the cheese on top of the olives and top off with chili flakes.

Place the slices back in the oven and let them bake for about 10 minutes, until the cheese is all melted. 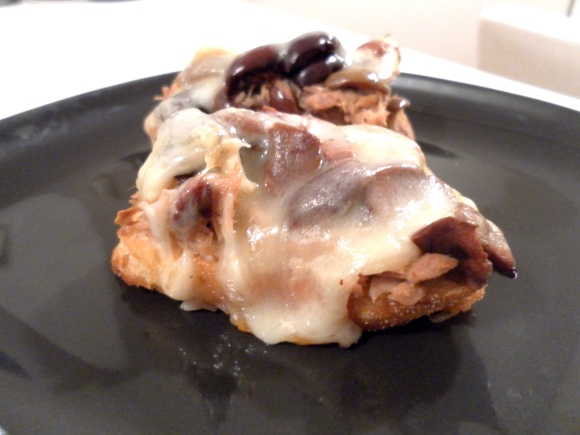 And there, you’re snack’s ready!