Dearest readers, I must begin by apologizing for my long absence. I’ve had a very busy summer indeed. But, I am back now, and I thought a great way to apologize would be to bake you all some delicious cupcakes.

I mean, just look at this cupcake: 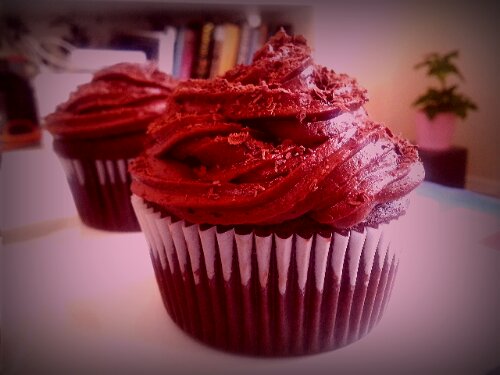 Can you imagine this ever not being delicious?

So you see, I am convinced that cupcakes are here to stay, whatever the naysayers may say (I agree with most things on Jezebel, but on the issue of cupcakes, Jezebel and I disagree, vehemently, see: http://jezebel.com/fuck-cupcakes-475125988.)

So, given their classic status (at least in my home and heart), here is a delicious and easy recipe for chocolate cupcakes, with some optional frills you can add to make them even more yummy!

(I’ve divided the ingredients into three groups, so it’s easy to refer to them collectively in the recipe.)

Icing sugar (to taste, usually not more than a cup)

About 140 g dark chocolate (this amount will vary depending on the darkness of the chocolate you choose and your taste as well).

2. Whisk all the ingredients in ‘Group A’ together in a bowl.

3. Whisk the sugar and cocoa together in another bowl. Add all the other ingredients in ‘Group B’, except the milk, and beat with an electric mixer on medium to high-speed, until the mixture is smooth.

4. Now beat the ‘Group A’ ingredients into the mixture from step 3, a few spoonfuls at a time, alternating with the milk. Beat until smooth. This is your cupcake batter. You can mix a handful or two of chocolate chips, if you like, at this stage.

5. Ladle or pour the batter into cupcake cups placed in a cupcake or muffin baking tray.

6. Place the tray in the oven and bake for about 20 minutes, until a toothpick inserted in the centre of the cupcakes comes out clean. Do not over bake as the cakes will then end up dry.

7. Once the cakes have cooled, take them out of the mold/tray. You can eat them as they are, or you can give them dark chocolate centers and frost them.

9. In the meantime, place an 8 ounce brick of cream cheese in a bowl, and beat it with an electric mixer, until it’s smooth and creamy. Add a teaspoon of vanilla essence, and a few tablespoons of icing sugar, then beat the mixture, and taste it. Keep adding sugar by the spoonful until it tastes just right. Now melt about 8 squares of dark chocolate (80 g) (my measurements for the chocolate are approximate because each person will want different amounts of chocolate in the frosting; so go by what tastes right) in the same bowl used in step 8. Pour this chocolate into the cream cheese-sugar mixture. Make sure that the chocolate is only warm, not hot. Now beat it all together until smooth. Your frosting is ready.

10. Spoon the frosting into an icing bag (if you don’t have one, you can spoon the icing into a sandwich bag or other type of plastic bag and cut a whole at one corner of it). Holding up each cupcake, swirl frosting on it.

11. Top off the cupcake with dark chocolate shavings, if you feel like.

12. You can also make cupcakes with mint buttercream frosting, as shown in the photo below. Just beat a cup of unsalted butter with a few drops of mint essence, a few drops of green food colouring, and icing sugar to taste. Then follow the same steps for frosting the cupcakes as described in 10 and 11.

13. Eat the cakes yourself, or throw a cupcake party for your friends 🙂 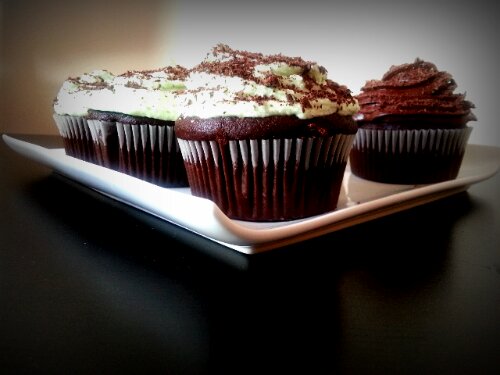